America’s Spirit of Freedom Was Born In Arbroath in 1320

It’s well known to every schoolchild, and drummed in to every tourist, that the Scots invented everything worth having, from the tea-towel to television. There’s a roll-call of scientists, doctors, writers and engineers who changed the world to an extent out of kilter with Scotland’s population. But a book by an American historian, published this weekend, has made the startling claim that Scotland also invented democracy and the American dream.

Linda MacDonald-Lewis hopes that Warriors and Wordsmiths of Freedom: The Birth and Growth of Democracy will bring an understanding on both sides of the Atlantic of the true debt Americans owe to the Scots.

The daughter of a Scot who divides her time between America and Scotland, MacDonald-Lewis believes the Declaration of Independence, the charter that laid out the early principles of democracy in the United States, was not based on a model from the ancient Greeks or the Magna Carta as is widely believed, but was in fact based on the 14th-century Declaration of Arbroath.

It’s time to highlight these links much more widely and in language people can understand,” she said. “If Americans want to understand their history, they need to look to Scotland, because that is where their ideals come from. And Scots should look across the Atlantic to see where their homegrown doctrines and ideas have been most fully embraced. 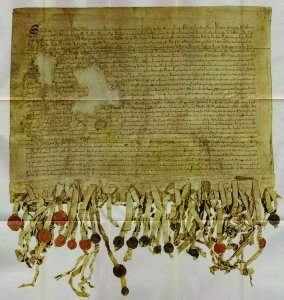 Presented to the pope in 1320 to confirm Scotland’s status under Robert the Bruce as a state with an ancient constitution, and to reject any English claim of sovereignty, the declaration drawn up at Arbroath Abbey formalised the idea of equality for all. The Declaration of Independence of 1776 was written to reject the British rule.

MacDonald-Lewis believes the similarities between the cries of freedom in both documents are a deliberate move by America’s founding fathers – half of those who signed the Declaration of Independence were of Scottish ancestry. Robert the Bruce, meanwhile, was the first ruler in Europe to be brought to power by a system recognisable as modern democracy, by “due consent and assent of us all”.

Speaking from Oregon, she told the Observer she believed Americans should have been toasting Scotland at their 4 July celebrations yesterday:

A lot of Scots who had to leave Scotland after the failed Jacobite rebellion ended up dying on American battlefields, fighting the same enemy on a different field.

The research I have done tracing these stories has really joined up a lot of dots in the intertwining histories of these two great nations. I found out only recently that George Washington treasured a snuff box that he had been given made from a piece of wood cut from the tree where William Wallace hid from the English at Falkirk.

Academics have previously linked America’s founding fathers to the Scottish enlightenment that was ongoing during the drafting of the US charter. Gordon Brown’s favourite historian, US academic Gertrude Himmelfarb, had written that Thomas Jefferson and other key figures studied the enlightenment’s leaders, such as Francis Hutcheson and David Hume, who were making a worldwide impact at a time when, as Voltaire, the French defender of civil liberties, said: “We look to Scotland for all our ideas of civilisation.

“As long as but a hundred of us remain alive, never will we on any conditions be brought under English rule. It is in truth not for glory, nor riches, nor honours that we are fighting, but for freedom – for that alone, which no honest man gives up but with life itself.”
Declaration of Arbroath, 6 April 1320

“We hold these truths to be self-evident, that all men are created equal, that they are endowed by their Creator with certain unalienable Rights, that among these are Life, Liberty and the pursuit of Happiness.”
Declaration of Independence, 4 July 1776 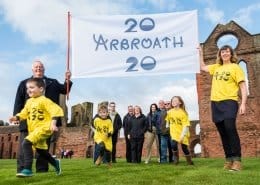